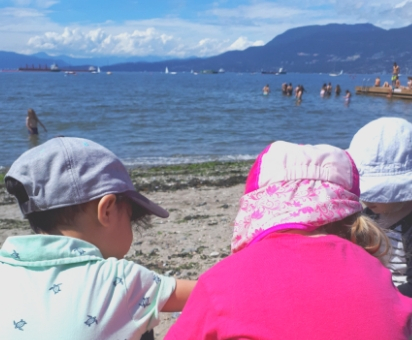 At Ocean Motion, we always try to tackle the big questions like ...

"Why do otters float?"

"How can belugas see with their voice?"

and a bonus question from Caleb .. "Do whales eat humans?"

.. then we look for the answers together!

We did an Sink or Swim experiment to test out the buoyancy of an otter's fur.

We met a Beluga named Bailey and tried using echolocation by playing a game of Beluga Marco-Polo (I say "Oooh~", you say "Eee!").

We saw the skeleton of a Blue Whale! The largest animal on earth! ... and we asked the Discovery Lab volunteers at Beaty Biodiversity Museum if whales eat humans and found out that they do .. .... ... ... .. NOT eat humans 🙂

While getting to know our new ocean friends have been super fun, it's time to get a little serious, and ask the biggest question yet to be asked in Ocean Motion ...

What can we do to save our Ocean?

Join us for our last two weeks of Summer Time Rhyme Big Kid's Club, to learn about the different ways that we can keep plastics out of sea! Though it might seem like a daunting task for little hands ..

We have to at least try 🙂

.. and if we've learned anything at all in our Big Kids Club journeys, it's that things that seems daunting can be fun when you do them with your friends! Join Ocean Motion on Fridays at 1-4pm or 1-5pm for fieldtrips!